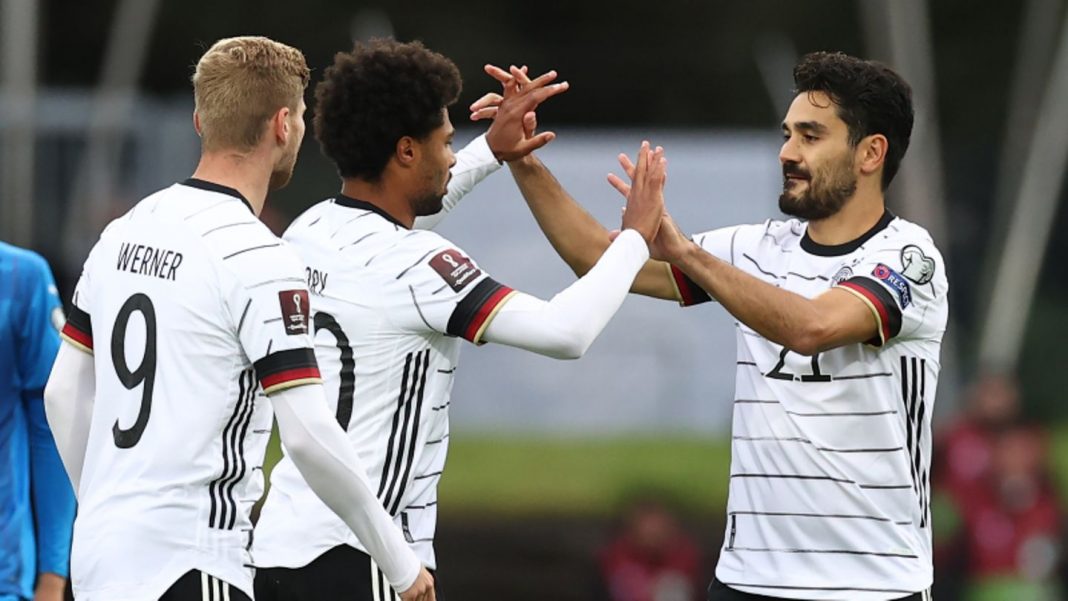 Hansi Flick has achieved his first goal. With the victory on Iceland, his first week as national coach ends flawlessly. Only his predecessor had a similarly good start as head coach of the DFB. The national football team takes direct course towards the World Cup in Qatar.

Against the harmless opponent Antonio Rüdiger (24.), Leroy Sané (57.) and Timo Werner (89.) on Wednesday night under thick, gray clouds in Reykjavik ensured the further goals to a befitting victory at the conclusion of the first international three-pack under Flick. Kai Havertz (55.) and Werner (61.) left out even the best chances for a new Schützenfest in front of 3500 spectators in the stadium Laugardalsvöllur.

As the now sovereign leader of Group J, the DFB-Elf can tackle the next tasks in October against the clearly distanced pursuers from Romania and North Macedonia. Flick releases its players with a good feeling in the upcoming top games in Bundesliga, Premier League and Champions League. With three wins without conceding a goal, only one national coach had started in the DFB history before: Joachim Löw with Flick as an assistant 15 years ago.

Talented crawling room: these are the new ones in the national team

When, after a good ten minutes, the legendary ” Huh!”the Icelandic fans echoed through the national stadium, Germany already led. The first quick combination towards goal via Werner and Sané completed Gnabry skilfully to his 19th international goal, which was still checked by the video assistant because of offside suspicion. On the sidelines, Flick was happy, this time wrapped up in a black jacket because of the autumnal temperatures on Iceland.

The national coach had left no doubt about his nine-point goal. “It’s our job to give everything again,” Flick had said shortly before the game on RTL. Again in the favored 4-2-3-1 lineup and with many, flat passes with speed to the top, the DFB selection dominated the first half. After the goal gala against Armenia, which played on Wednesday against outsiders Liechtenstein only 1:1, Flick changed only once: Ilkay Gundogan took the position in the attacking midfield of Marco Reus, who was slightly beaten not even flew along.

In the air, Flick and his coaching team had actually calculated fewer chances against the usually great Icelandic national players. But Rüdiger used a clearly rehearsed free kick variant with a powerful header to his second DFB goal after almost four years. Joshua Kimmich had chipped the ball thoughtfully over the penalty area, where the Chelsea defender lurked. Standard situations are very important to Flick – with Mads Buttgereit, a special trainer was hired.

16. Qualification – Away win in series

The hosts brought the once again enormously clarified DFB defense in the first half hardly in danger, with the shots of Ísak Jóhannesson (17.) and Johann Gudmundsson (43.) Manuel Neuer was on the spot in the German goal. Iceland goalkeeper Hannes Halldórsson saved well against Leon Goretzka in the 27th minute, which did not change the fact that the DFB-Elf controlled the game. Already at the break it was clear that the impressive statistics of the away team undefeated in the World Cup qualifier will be expanded. The success in Iceland was the 16th qualifying away win in a row.

Kai Havertz and Lukas Klostermann came into the game for Gnabry and Jonas Hofmann in the second half. Flick had repeatedly stressed that he also wanted to pay close attention to the load control. Among other things, the Bayern pros, six of whom were in the starting eleven, play on Saturday at RB Leipzig and next week in the premier league at FC Barcelona.

Germany had a bit of luck when Johann Gudmundsson only hit the post at the beginning of the second half (49.) – for a few minutes the DFB selection had become a bit careless. But the flick elf quickly caught herself again. Havertz put the ball after an overtime attack first past the goal (55.), before Sané with a left shot under the crossbar eliminated last remaining doubts about the German victory. The Bayern pro smacked grinning with template provider Goretzka and was replaced a little later for Jamal Musiala (60.).

Flick could take a seat on the bench, even if Werner missed the next huge chance from a short distance (61.). Halldórsson also held against Gundogan (72.). In the onset of Iceland rain, the DFB selection brought the victory routinely to the goal, Werner made in the final phase but still his third goal in the third game under Flick.