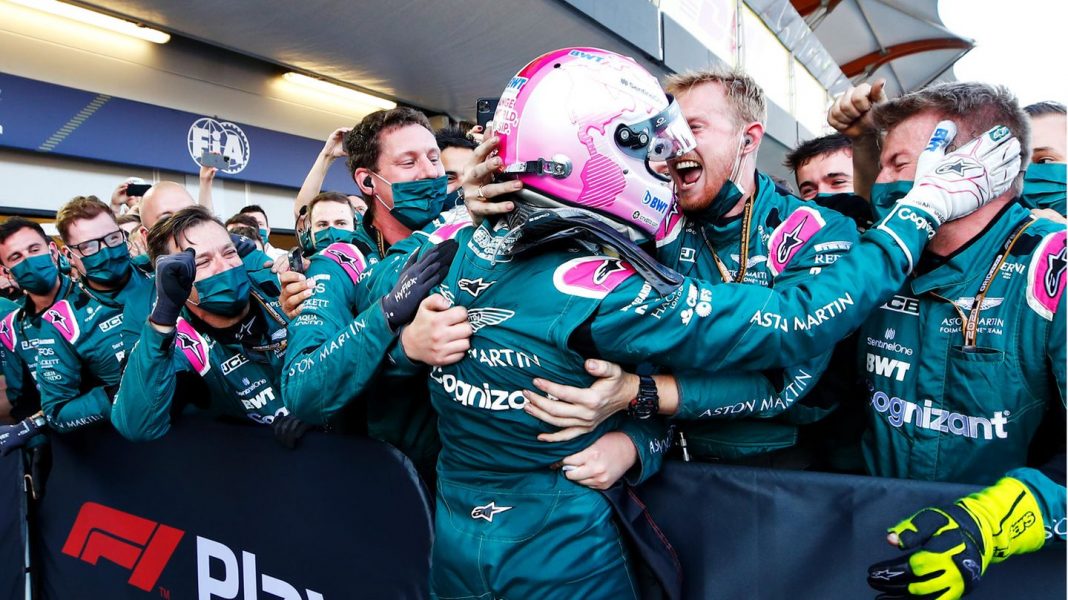 Red Bull driver Sergio Perez has won the Formula 1 race in Baku. The Mexican benefited on Sunday at the Azerbaijan Grand Prix from a flat tire of his teammate Max Verstappen, who had led the sixth round of the season for a long time confidently.

Sebastian Vettel steered his Aston Martin from eleventh place on the grid to second place and thus reached the podium for the first time for his new team. The third place was taken by Frenchman Pierre Gasly in the Alpha Tauri. Newcomer Mick Schumacher finished the race at the Caspian Sea in 14th place.

On the street circuit at the Caspian Sea, Vettel clearly surpassed his best result of the season so far as fifth place from Monaco two weeks ago, because in the end defending champion Lewis Hamilton in the Mercedes also shot impetuously off the track and remained pointless.

Red Bull driver Verstappen looked like the sure winner for a long time before he missed his third victory in the sixth race of the season. In the 47th of 51 laps, his left rear tire suddenly burst at an enormously high speed. The victory was secured by Verstappen’s Mexican teammate Sergio Perez ahead of Vettel and Frenchman Pierre Gasly in the Alpha Tauri.

In a shocking way, Red Bull missed their first double success since October 2016 in Malaysia. After all, the frustrated Verstappen got out of his car unharmed without any problems after a hard impact in the track boundary. After that, disappointed, he kicked the tire and grabbed his head.

The title challenger at least retained his lead in the World Championship standings. At the restart after a long break, the seven-time champion Hamilton risked too much, missed the first turn and came to the finish in 16th place. For Vettel, on the other hand, there were whopping points for the second time in succession.

Also in the past, Vettel had coped well in Baku. He had never finished the race on the Caspian Sea worse than in fourth place. At the last edition in 2019, he had finished second in the Ferrari, a year earlier he was on pole position. Newcomer Mick Schumacher steered his inferior Haas racing car to 14th place.

Polesetter Charles Leclerc also prevailed at the start one day after the chaotic qualifying. The Monegasque had benefited on Saturday of premature termination, and let Hamilton and Verstappen behind. In the third lap, however, Hamilton took advantage of the long home straight and overtook Leclerc effortlessly. The Silver Arrows had bigger problems in the days before and could not keep up with Red Bull and Ferrari in the time chases.

While Verstappen passed Leclerc on the seventh lap and started to chase Hamilton, Sebastian Vettel quickly had the points in view. The 33-year-old moved up to ninth thanks to a good start. A qualifying interruption had spoiled the Hessen a better starting position the day before. After fifth place two weeks ago in Monaco, Vettel again showed a strong performance and was suddenly even at the front.

For the first time since the 2019 Brazilian Grand Prix, he led mainly because of the previous pit stops of the top drivers. At the top, the 53-time race winner showed a flawless performance, but had to settle back into seventh place after his tire change. Vettel would have been only too happy to have been permanently at the front again this year, but there is still a lot missing.

Shortly before Hamilton had lost the lead to Verstappen. Two weeks after his first victory in Monaco, the challenger from the Netherlands, who had never made it to the podium before in Azerbaijan, remained in front even after his first stop in the pits. For the first time, Verstappen had started a weekend as the overall leader because Hamilton had only finished seventh in the principality.

Verstappen kept the defending champion at a distance because Red Bull teammate Sergio Perez was still between the rivals as a buffer. With all his might, Hamilton tried to keep up with Perez. “I’m losing ground”, Hamilton radioed to his team before the half of the race and could not do anything against Perez.

The safety car must go out

After Vettel’s teammate Lance Stroll burst the left rear tire at high speed and hit the track limit, the safety car had to hit the track. Verstappen remained clear of Hamilton even after the restart, behind Vettel passed Leclerc first and then Pierre Gasly in the Alpha Tauri. Then everything looked like a quiet end to the race – until Verstappen crashed into the wall.

The race was interrupted for more than 40 minutes. Then it started again for two rounds. And Hamilton squandered the chance to regain the championship lead, while for Perez and Vettel the day was finally perfect.