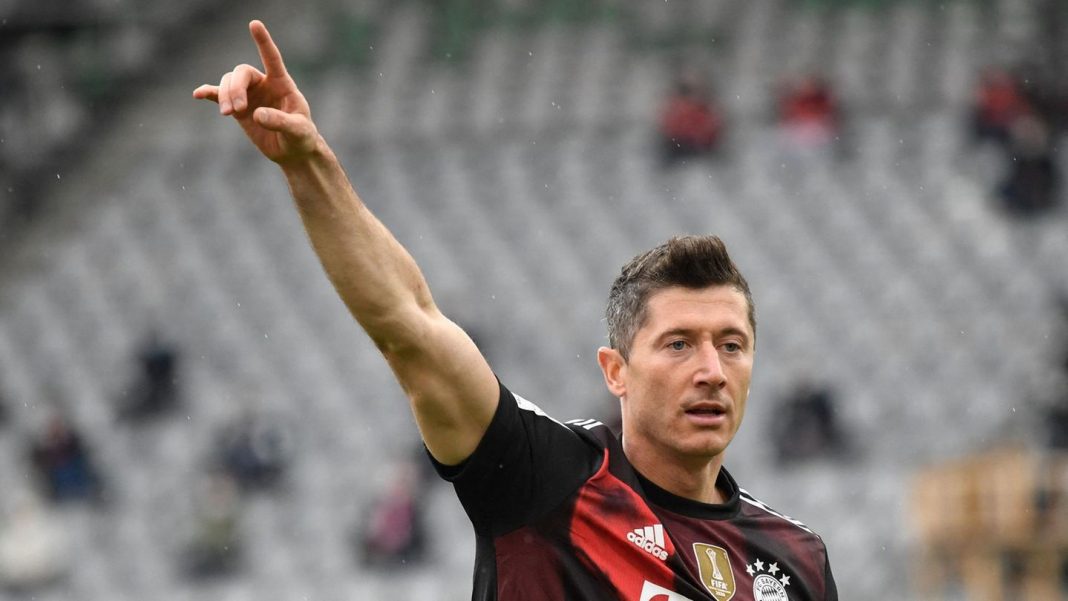 With a converted penalty Robert Lewandowski equalises with Gerd Müller. When the world footballer sets the Bundesliga goal record, he honors the Bayern legend with a special action.

World soccer player Robert Lewandowski of FC Bayern Munich has set Gerd Müller’s Bundesliga record of 40 goals in a season. The 32-year-old Pole scored his goal of the season number 40 in the 26th minute of the German champions ‘ game at SC Freiburg on Saturday, equalising Müller’s record from the 1971/72 season, which was regarded as unattainable for decades.

Lewandowski converted the penalty flatly and safely. After his goal he presented a black T-shirt with the image of Müller and the white inscription “4EVER GERD” under his jersey. Bayern players and coaching staff formed a trellis for him in front of the bench on the sidelines and applauded. “Masterfully transformed. If he has earned himself, he has earned himself. Congratulations on this record and the 40th goal, ” said Lothar Matthäus at half-time on pay TV channel Sky.

“Grateful that I get so many templates from my colleagues ”

For Lewandowski it is another milestone in his career as a professional. He has already been top scorer in the Bundesliga five times: in 2014, 2016, 2018, 2019 and 2020. His previous season record was 34 goals. “It doesn’t help if you want it too much”, he had said a week ago after his three-pack in the 6:0 of the German champion against Borussia Mönchengladbach to his record hunt.

“You can see that he is in great form,” said Captain Manuel Neuer after the Lewandowski show against Gladbach. The outstanding league player knows, of course, that he is not solely responsible for the record. “I can be thankful that I get so many templates from my colleagues,” Lewandowski remarked.

The successful record chase is also to be rated particularly high because the world-class attacker missed four Bundesliga games after a knee injury at the end of March. Lewandowski was also sorely missed by Bayern in their Champions League exit against Paris Saint-Germain. He returned to the pitch three weeks ago in the Munich 1-2 defeat in Mainz and scored his 36th goal of the season.

With 276 Bundesliga goals, the former Borussia Dortmund player ranks second on the all-time goalscoring list behind former Bayern striker Müller (365 goals). Perhaps Lewandowski can still attack this record in the coming years. His current contract in Munich runs until 30 June 2023.