The end of a love: Kohfeldt’s time at Werder Bremen seems to be coming to an end 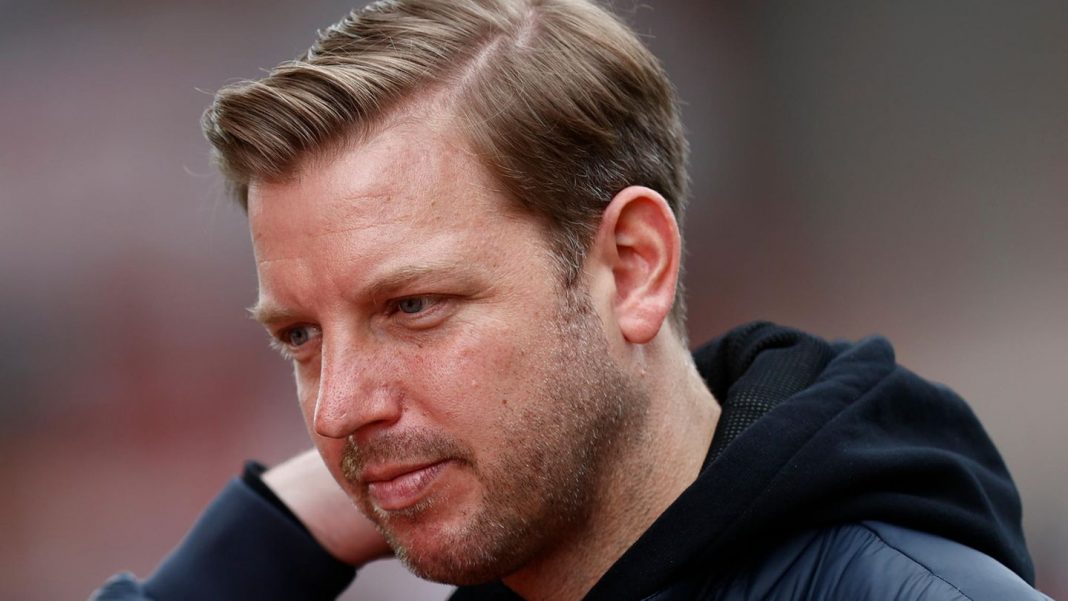 In acute need of descent
The end of a love: Kohfeldt’s time at Werder Bremen seems to be coming to an end Despite provisional loyalty: coach Florian Kohfeldt seems to have no future as coach of Werder Bremen. But the separation from him is difficult for those responsible, because he is an integral part of the Werder family.

Those who experienced Florian Kohfeldt after the defeat against Union Berlin at the press conference saw a coach who suffered the most painful defeat (1:3) of his career. Kohfeldt seemed deeply affected: “It is a very bad situation that we must fight with all our strength,” he said. “I can rule out running for myself.”These are statements that hardly sound convincing after seven consecutive defeats and acute relegation problems, even if they were meant honestly.

The situation is serious in Bremen, relegation is imminent – and Kohfeldt has no more arguments. After the 24. Matchday the team stood with 30 points on the 12th place of the table and had eleven points advantage on a relegation place. Seven games later she is with 30 points on the 14th place of the table with only one point advantage on the relegation place. It is a classic voltage drop that took place here. Coach, team and club felt too safe too soon. This is now taking revenge, there is the threat of a free fall to the second league, which would have catastrophic financial effects. Under the difficult conditions of the corona pandemic, the association only keeps itself afloat with loans and a state guarantee.

Thomas Schaaf is available as a possible successor to Kohfeldt, currently the Werder legend is Technical director of the association. In a similar situation, Schaaf started an era as Bremen coach in 1999. He took over four days before the end of the season, saved Werder from relegation and became Cup winner in Berlin – against FC Bayern.

But the memory, which is charming for Werder supporters, has little to do with the current situation. History rarely repeats itself and in football much has changed in recent years. He would not be a future solution like 22 years ago this time.

Why Max Kruse, Christoph Kramer and Co. are committed to homosexuality in football


Another difference: in 1999, they were happy at the Weser to get rid of the universally unpopular Felix Magath. Nobody wept a tear after him, the dismissal worked for team and club like a release. This is quite different with Kohfeldt. The 38-year-old is an integral part of the Werder family. He has been a member for almost 20 years, since he joined the third team as a young goalkeeper. For a professional career, the talent was not lacking, for that of the coach. In Bremen, he took over one youth team after another until he was promoted to head coach in November 2017. It was regarded as a great promise for the future and, as the green-and-white daydreaming had foreseen, was to establish an era like Otto Rehhagel or Thomas Schaaf once did.

The conditions in Bremen are difficult

That did not work. On the one hand Kohfeldt works under difficult conditions. Since he took over the team, he had to cope with a rigid austerity. Last summer, only young players came as reinforcements, most of them were previously on loan. That is why the club management around Sports director Frank Baumann and Supervisory Board Chairman Marco Bode has to answer the following question: Would a dismissal bring anything at all in view of the quality of the team? A crystal clear answer might be difficult.

There is no question that Kohfeldt himself also makes mistakes. Before last season, they thought they had a chance at an international league place in Bremen. This turned out to be a gross misjudgement of the entire sporting leadership (reinforced by an extensive injury series). A player like Yuya Osako, intended by Kohfeldt as the successor of the outstanding Max Kruse, did not meet expectations – a misjudgment. In the end, Bremen saved themselves more with luck than understanding into the relegation. Even then there were demands to dismiss Kohfeldt, but the Bremen players remained true to their tradition of sticking to a coach.

Things went better for a long time in the current season. Kohfeldt ordered the team at times an unsightly defensive football, but delivered results and seemed to stabilize the team. But when the Bremen side were good after 24 match days with 30 points, they weighed themselves too much in safety – also Kohfeldt. It was again a miscalculation. This was followed by seven defeats in a row, a disastrous performance. The team makes too many mistakes in possession, develops too rarely goal danger and often sets itself dilettantisch in the defensive. Kohfeldt had successfully switched off the latter in between.

Now that the team threatens to be relegated to the second league, the club management does not want to make a quick decision. For them, it is important whether the relationship between coach and team is intact. If you look at the last two games against Union Berlin and Borussia Dortmund, this does not seem to be the case. The team sometimes seems inhibited. It is hard to believe that Kohfeldt rips the wheel around despite his undisputed merits.