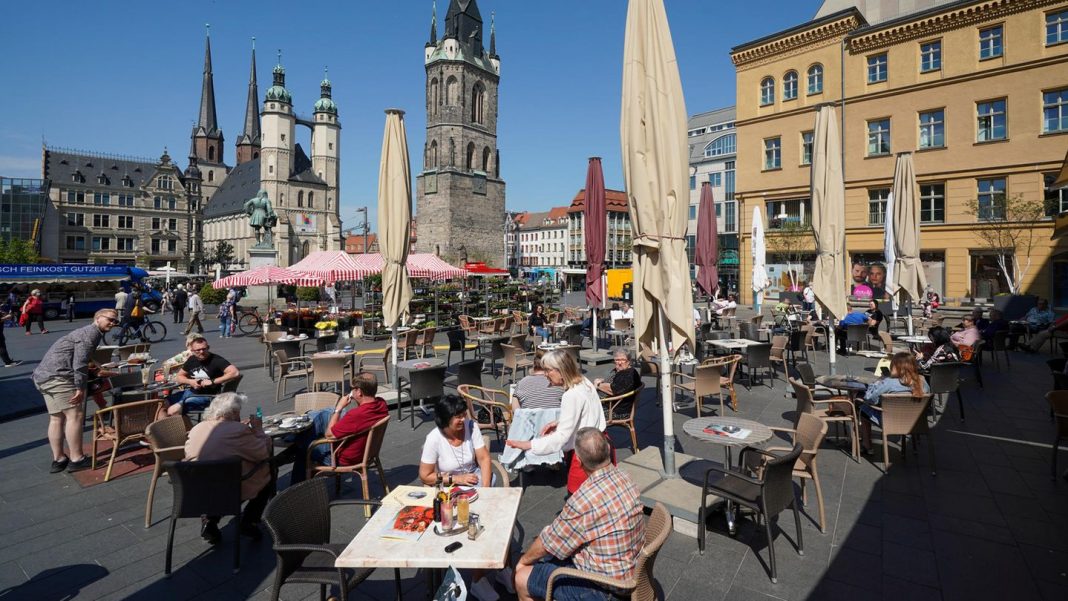 Street café and indoor gastronomy, larger meetings and sometimes fewer test duties: Everyday life in Germany seems to be normalizing, many are still thinking about the good summer of the previous year. About differences and similarities.

The classification of the corona risk has been reduced from” very high “to” high ” and many corona measures are being relaxed: After more than a year of pandemic, many want a summer without virus worries. But if you keep a close eye on the infection numbers, you will notice that the decline in the seven-day incidence has stopped. According to data from the Robert Koch Institute (RKI) on Wednesday, the number of infections per 100,000 inhabitants rose slightly for the second day in a row within a week. The value is now given as 36.8. The number of new infections reported per day is also above the level of Wednesday last week.

RKI chief Lothar Wieler had said on Tuesday that modeling suggests a slight temporary increase in incidence. The RKI relates this to opening steps. An influence of the holidays on the registration figures is also to be assumed.

According to Wieler, however, the RKI does not initially expect a renewed exponential growth in the number of cases with cautious openings. However, the RKI modeling of interactions between the cancellation of measures and the vaccination campaign does not take into account, for example, a possible spread of more contagious variants, it is also assumed that 85 percent of people aged 60 and over are ready to vaccinate.

Elimination of vaccination prioritization: what you should know now

“We can definitely breathe a little sigh of relief”

Despite these certain uncertainties, other experts are currently expressing optimism. “We can definitely breathe a little sigh of relief, “said virologist Ulf Dittmer of the” Rheinische Post ” (payment content). At the same time, he warned that one should not believe that the virus has disappeared. Outbreaks, for example in unvaccinated groups, could briefly drive up the incidence. “However, I think a fourth wave has now been ruled out in Germany.”

Like Dittmer, Charité virologist Christian Drosten appeals to keep wearing masks: masks indoors are still an important protective measure, of which people should also make use, he explained on DPA request. A study led by him had shown that those infected with the most common virus variant in Germany currently excrete about ten times more viruses. According to Drosten, contagion situations only require shared airspace, such as a moderately ventilated interior, and a certain amount of time to share that air.

Open restaurants and cafes, even some culture: these pictures give hope for the summer

A summer effect is described in the widespread cold coronaviruses, Drosten explained: Not only the temperature, but above all the lower proportion of indoor contacts lead to a decrease in infection events. “The ‘summer’ effect is significant, but not as high as we would all want,” he said. Based on a modeling by US epidemiologists, transmissions could be reduced by about a fifth (21 percent) in the summer. “In my opinion, this is a guideline for the seasonal effect of SARS-CoV-2 in the coming months,” says Drosten.

The differences from the previous year

Some people remember the much lower seven-day incidences around a year ago: back then, the values had even been single digits. At the beginning of June 2020, fewer than three infections per 100,000 inhabitants were recorded in one week. So why are the authorities still talking about positive developments in the current situation? A direct comparison of the situation of then and now is only possible to a very limited extent, because many basic requirements have changed.

“We are not in a situation comparable to the end of the first wave,” Drosten said last week at an expert hearing in the Bundestag’s Covid-19 pandemic monitoring committee. One could not conclude from then on to today. The virus is now much more regularly distributed among the population, both geographically and in age groups.

At the beginning of June, at the end of the first wave, the number of Covid-19 intensive care patients treated at the same time was over 600, according to the Divi Intensive Care Register. Currently, with the third wave fading, there are still significantly more than 2000. Experts assume that the number of infected people is now probably better illuminated by increased testing than at the beginning of the pandemic. Children, for example, who are usually not seriously ill with Covid-19, had rarely been tested at first.


The number of weekly laboratory tests in April and May 2020 was usually in the range of 300,000 to 400,000 per week. At times, the criteria for a test were quite narrow. This spring, there were more than one million PCR tests per week and as many as 1.4 million in the 16th calendar week. The proportion of positive tests had stood at 1.0 percent at the beginning of June 2020, while RKI reported it at 5.82 percent according to recent data.

In addition, there has been an ever – expanding range of self-and rapid tests for weeks: positive cases, however, only flow into the RKI statistics if they have been confirmed in the laboratory.

However, the significance of the incidence is increasingly changing due to vaccinations, which are expected to have less severe courses and deaths. This should also relieve the health system. According to epidemiologists, the contagions are now mainly concentrated in the group of people who have not yet been vaccinated or recovered.