Zolgensma: Baby is the first patient to receive the world’s most expensive medicine 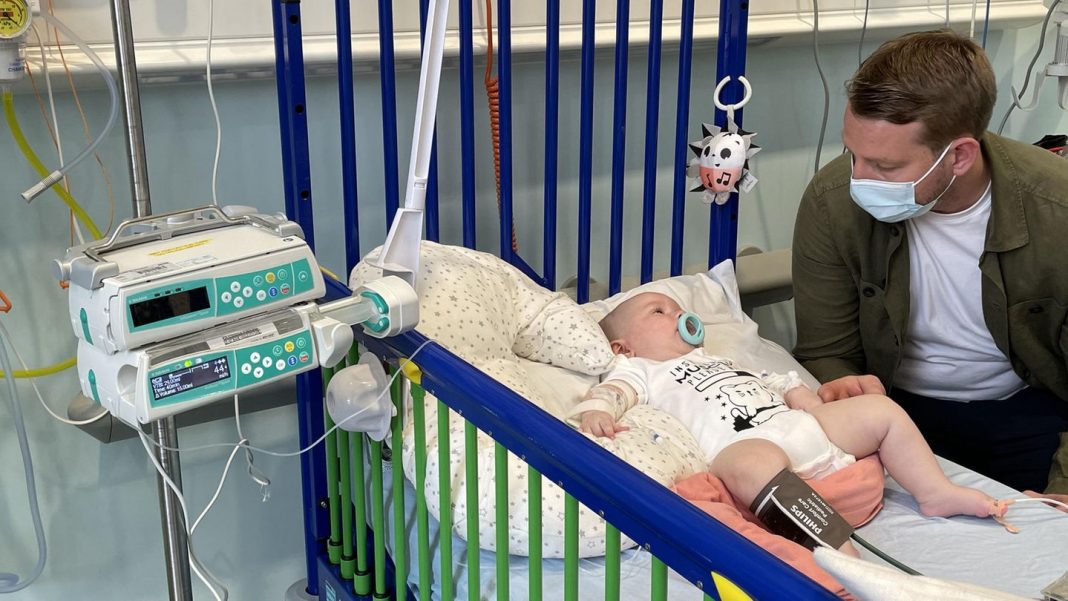 Kingdom
State-paid: baby is the first patient to receive the most expensive drug in the world

The drug Zolgensma is the most expensive drug in the world – and so far the only one that can help with spinal muscular atrophy. For the first time, the British public health system NHS has now covered the costs of treatment.

Little Arthur Morgan from south London is only five months old and seriously ill: he suffers from spinal muscular atrophy (SMA), a genetic defect also known as muscle atrophy. Sufferers usually suffer from progressive muscle weakness, loss of movement and problems with breathing. In the worst case, the disease can also be fatal: more than half of the affected babies die before their second year of life.

Arthur’s parents had noticed that something was wrong with their young son when, unlike other children of his age, he could not sit upright and had difficulty holding his head. In the hospital, the family was then diagnosed with SMA. But there was hope, because there is a saving drug: Zolgensma should be able to prevent paralysis due to SMA – but at 1.79 million pounds (equivalent to over two million euros), it is the most expensive drug in the world and has been unaffordable for many families in the past.

How is a drug actually developed?

However, little Arthur was lucky: he is the first patient to receive the life-saving infusion with Zolgensma barely three weeks after diagnosis – because the British National Health Service (NHS) had already concluded a contract with the manufacturer Novatis Gene Therapies in March and was thus able to offer Arthur the necessary drug. The amount agreed between NHS and Novatis has not been published, but it is said that the sum is “fair”to the British taxpayer. For Arthur’s family, NHS drug delivery means hope for their son: “When we found out Arthur was going to get the treatment and be the first patient, I just broke down,” father Reece tells the British news agency “Press Association”. “It has been a turbulent few weeks, filled with many fears and changes since we learned about his illness and what it could mean for him and our family.”He was NHS “so grateful”.

A single infusion is enough

Treatment with Zolgensma is one-time and is a gene therapy. A faulty gene, which the patients carry in themselves and which prevents the body from producing a protein important for muscle function, is replaced by a corrected gene by infusion. This then instructs the body to produce the required protein. According to studies, one-time treatment with Zolgensma in infants already ensures that they can learn to sit, crawl and walk, and no longer need a respirator.

Long-term consequences of gene therapy are not yet known – the approval was only recently. Little Arthur, who was born six weeks early, suffers from SMA type 1, the most common form of the disease. SMA is a genetically determined disease and is inherited.

Arthur’s family has now opened a donation page. Already 25,000 pounds (almost 30,000 euros) have been collected in this way so far. The money is intended to support Arthur’s parents in taking care of both their sick son and his older sister Nancy, without having to worry about money during periods of intensive hospitalization. “We still don’t know what the future will bring, but this treatment gives Arthur the best possible Chance at the best possible future,” says father Reece “Press Association”, and adds: “This is the best possible treatment and will give him the best possible life he can have, and we are so grateful to the NHS for him.”The cost assumption by the British state health system should also be able to help other affected babies such as Arthur in the UK in the future.

Source: “Press Assocation “in” The Guardian”