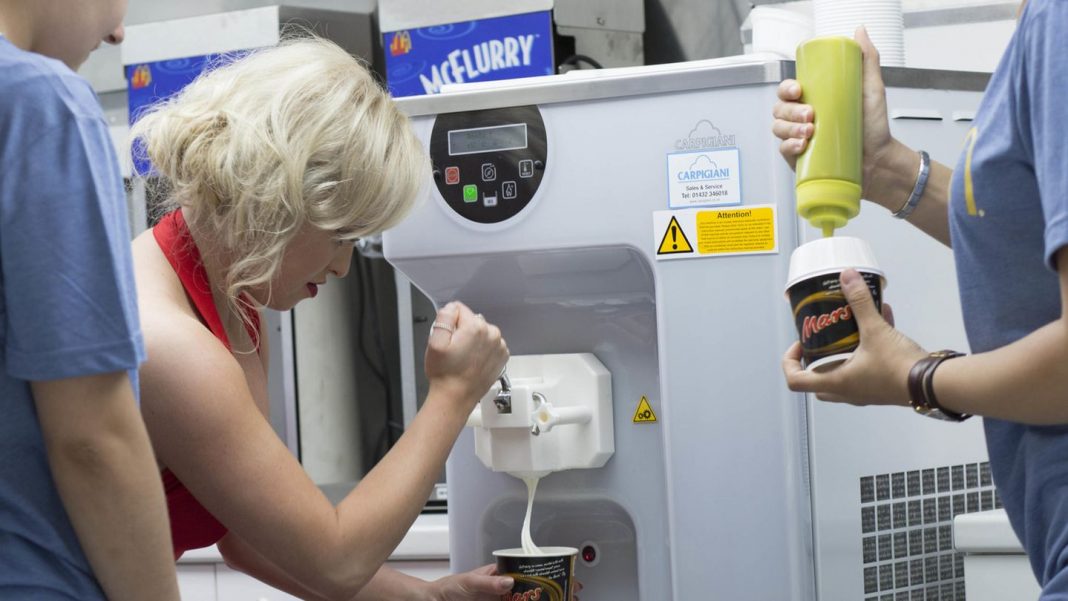 Burgers, fries-but no soft ice cream. Again and again at McDonald’s the ice machines stand still. A couple wanted to change that. And did not expect the revenge of the ice machine industry.

“The machine is not in operation right now” – this answer is probably familiar to almost everyone who tries to buy an ice cream from McDonald’s every now and then. The defective ice cream machines of the burger chain have long been a running gag on the net, many even jokingly suspect a conspiracy behind it, joke that the burger chain actually does not sell ice cream at all. What the frustrated customers don’t know: behind the scenes, a tough battle is raging over the ice failure.

The main players are McDonald’s, the machine manufacturer Taylor, which equips most of the US stores and many overseas stores with ice machines, as well as the start-up Kytch. By chance, this found a way to reduce machine failures. And broke the conflict off the fence, reports a current, very detailed article on “Wired”.

Basically, the problem is not new. The phenomenon is so well known that a website always displays the current status of the machines of all McDonald’s stores by automatically trying to buy ice cream online. The result is astonishing: up to 20 percent of the ice machines are reported out of operation. So it’s no surprise that social media is full of posts and jokes about the ice failures. Even the official Twitter account of McDonald’s joked about it. “We have a joke lying here about ice machines. But we are not sure if it will work “, sneered the Social Media Team of a fast-food giants last summer.

Kytch wanted to change that. Originally, the operators had operated their own company, which sold vending machines that offered frozen yoghurt fully automatically on the basis of Taylor machines. However, the so-called Frobots fell again and again, and Jeremy O’sullivan and his girlfriend Melissa Nelson went in search of the error. They discovered a secret control menu that Taylor does not mention in any of his instructions. With the help of a team of Chinese technology experts, they were able to control the menu more easily via a small box and make the hidden data from the inside of the machine accessible in an app. Kytch was born.

App control as a rescue

The first customers were enthusiastic. Sullivan sought out stores that used a Taylor machine and offered to you via the career Portal Linked.in a test month with the small box. After that, he demanded 10 dollars a month for the operation. The Feedback was enthusiastic. “I dread not being able to use it in milkshake or soft ice cream machines at some point, “CJ Timoney, who runs several Burger King stores, told Business Insider last year. “It gives us an amazing amount of security.”

In fact, the box significantly reduces the number of possible sources of error. There are a lot of reasons for the constant failures. One of the most important is the long cleaning cycle. The Taylor machines used by McDonald’s do not have to be emptied and disassembled like other machines. Instead, clean yourself with heat, including the ice mixture inside. The big disadvantage: the process takes four hours-and must be started from the beginning after an interruption. This is not only a problem if the employees want to leave early and start cleaning earlier. Because the machines react extremely sensitively, even a single wrong-seated particle can cause the cleaning to fail. And in the morning the machine stands around uncleaned.

But the machines are also sensitive in operation. If a part does not sit properly or if the amount of ice inside is too large or too small, it also gives up the spirit. It is these mistakes that Kytch makes. Although the small box can not shorten the duration of cleaning. With the exclusion of the other errors, however, you can reduce failures in operation. And ensure that the cleaning actually works at the first start. For example, by detecting temperature and pressure problems in good time. “We can tell if the machines are too full – or not enough, “Sullivan told Business Insider.

But while individual branch operators express themselves enthusiastically, the McDonald’s Group and the machine manufacturer seem to think little of the innovation. Both companies have been more friendly towards Kytch. At the beginning, Taylor supported the two founders with the development of the box, at least let it be seen that the development was not perceived as a problem. But that was when the box was supposed to be in the Frobots. And not cost Taylor revenue.

The company’s business model includes not only the production of the machines, but also their maintenance. This costs thousands of dollars a month to some of McDonald’s franchisees, reports “Wired” citing insiders. Since the Kytch subscription, which is now twice as expensive with 20 dollars, quickly appears as a bargain, if it makes even a call to the service unnecessary. For Taylor, however, any failure of the ice machines in turn means a direct failure of the revenue from repairs.

The company clearly does not want to let this go. Only two days after the market launch, first employees of Taylor, later private investigators tried again and again to get Kytch devices delivered, reports Sullivan. Taylor denies this, but since autumn, the company has suddenly offered its own solution called Taylor Shake Sundae Connectivity, which virtually offers the functionality of a Kytch as an additional module for the machines.

Since then, the atmosphere between Kytch and McDonald’s has also cooled down. In the meantime, the group is openly warning its franchisees not to use Kytch devices in their ice machines; they would put employees and technicians “at serious risk of injury,” the group wrote in an e-mail. And instead recommended the model offered by Taylor. Both companies confirmed the warnings to “Wired”.

Sullivan and Nelson have had enough. After the warnings, many of their customers had terminated their contracts. In a lawsuit, they want to prove that Taylor stole their business idea. An operator of ten McDonald’s stores, who once touted Kytch at a franchisee conference, is now the prime suspect of the two Kytch founders having passed their device on to Taylor. Thus, the branch operator would have violated Kytch’s terms of use, which is why he is also one of the defendants.

However, the dispute does not bring much benefit to McDonald’s customers. There are fundamental problems with the functioning of the machines, McDonald’s employees complained to the ” Wall Street Journal. “Everything about the machine is just miserable. If someone came to the store 30 minutes before closing and ordered a McFlurry, would you risk sowing in the whole area you just cleaned? No.”No smart analysis tool can fix this.