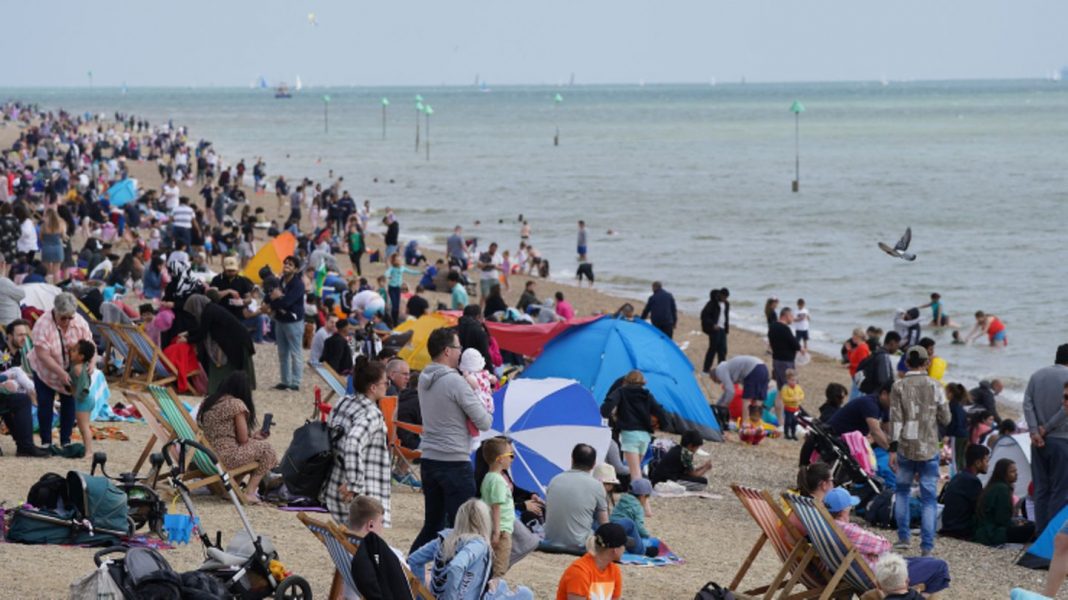 Because of Indian mutant
Experts fear third Corona-wave in the UK – a warning for Germany?

Actually, the last corona restrictions in the UK are to be lifted in three weeks. But now scientists are warning against a third wave in view of the Indian variant.

In the pandemic, Britain became a beacon for the rest of Europe. How bad the first two waves would hit the continent was previously observed by Europeans on the British Isles. When an” almost normal ” summer loomed in the kingdom last year, mainland Europe also breathed a sigh of relief. While the EU still dreamed of vaccination at the beginning of December, the Brexit state had already begun the saving campaign. And even when the first virus mutations caused new horrors, the problem had long been known in the UK.

Therefore, the latest developments on the island are all the more vigilant – and they are positive in a negative sense. Just three weeks before the last restrictions should fall in the country, several scientists warn the government of a third corona wave.

Indian variant on the rise

“There has been an exponential growth in the number of new cases and at least three quarters are the new variant,” microbiologist Ravi Gupta said in a BBC interview on Monday. Variant B. 1.617.2, which was first discovered in India, is spreading rapidly in Great Britain and, according to initial findings, is considered to be significantly more contagious than previous forms.

On Sunday, Britain counted a good 3200 new corona cases, the seven-day incidence is 27. Although the case numbers are still relatively low, said Gupta, who advises the British government in a panel on new emerging virus threats. Nevertheless, he sees signs of a beginning wave. Martin McKee, professor of European public health at the London School of Hygiene and Tropical Medicine, agrees. “We are already seeing that the current measures do not prevent cases from increasing rapidly in many parts of the country. It looks a lot like we’re at the beginning of a third wave,” McKee said.

The experts fear that a further increase in Covid patients in hospitals would further delay the huge backlog of non-Covid cases. “If there is no miracle, further opening in June is a big risk,” warns McKee. “The increase in cases we are seeing now should prompt a reassessment of recent easing.”

But they don’t want to let it happen in London yet. Despite the warnings of scientists, the British government insists on pursuing its opening plan. It is too early for speculation, according to Downing Street.

However, Vaccine Minister Nadhim Zahawi has so far refused to deny that restrictions – such as mask wearing and home office – could remain in place. There will be a new announcement on 14 June. “We need to look at the data and we will share it with the country,” he said. With the number of cases rising again, senior scientific government consultants recommend extending the home office obligation beyond June in order to reduce the number of contacts.

Despite the progress of the vaccination program, consultants are unsure to what extent the new infections – which were last recorded at this level at the end of March – will lead to more hospitalizations and deaths again. “It will probably take longer than previous waves to emerge because we have a high level of vaccination in the population,” Gupta said. “Therefore, there may be a false sense of security for some time, this is our concern.”To date, almost three quarters of adults in the UK have received their first vaccination, and almost half have received both doses.

“Surreal” pictures: So exuberant England celebrates the end of the hard lockdown


What does the British development mean for Germany?

It is only a matter of time before the latest signs from the UK could also cause a queasy feeling in Germany. What happens if the variant from India also spreads in this country, is so far difficult to predict. Although the corona numbers look better from day to day-all federal states are now below the 50s incidence – it is still important to be on your guard.

“I think there may be another wave. But it may be smaller. And the health system would be significantly less burdened,” Thorsten Lehr, a Saarbrücken expert on corona forecasts, told the German Press Agency. Whether and how much the numbers could go up again depends on the pace of easing, travel and the possible decline in vaccination readiness in the autumn.

Overall, however, from Lehr’s point of view, Germany is “on a very, very good path”: the incidence, death rates and patient numbers in hospitals declined. However, a look into the past shows that one should keep a close eye on the British warning light.