At Coronafall: No longer whole school class in quarantine 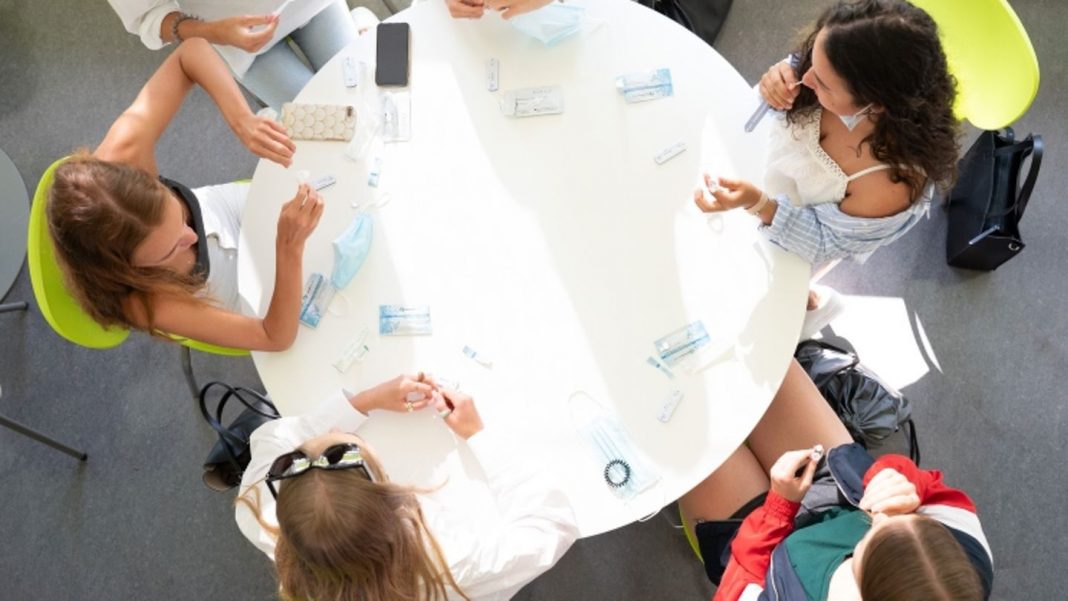 New quarantine rules
In a corona case, the whole school class no longer has to stay at home

What happens if a child has corona in class? Across the republic, there are various guidelines on who then has to stay at home for how long. The countries are making a push for more common ground.

The majority of state health ministers have spoken out in favour of simpler quarantine rules for corona cases in schools. In principle, quarantine should no longer be ordered for the entire class in a case, says a decision after consultations with the federal government on Monday. Symptom-free children who are quarantined as close contact persons should be able to terminate them with a negative test after five days at the earliest. The chairman of the heads of state departments, Klaus Holetschek (CSU) from Bavaria, said that this should serve as” guardrails ” for the health authorities. The decision was adopted with two countries abstaining.

Until now, countries have dealt differently with a quarantine period of 14 days when an infected child is found in a class. Sometimes only sitting neighbors are sent to quarantine, sometimes whole classes. Federal Health Minister Jens Spahn also supported simpler rules, but at the same time insisted on protection concepts. The prerequisite is that basic rules are implemented, namely mask in the classroom, regular tests and ventilation concepts, said the CDU politician before the federal-state consultations.

Quarantine orders”with a sense of proportion”

The decision before the German Press Agency states that quarantine orders must generally be issued” with a sense of proportion ” depending on compliance with such concepts. In the interest of the most reliable classroom teaching, the order of a quarantine should also be limited to “as few people as possible”. Vaccinated and recovered persons should be excluded in principle. The health authority should take the necessary measures on the spot.

For other children in the class who are not classified as close contacts, intensified tests should be carried out “for a certain time”, the decision continues. In daycare centers, too, there should be quarantine” only with a sense of proportion taking into account the concerns of children and childcare facilities”. Here, too, a “freest” from a quarantine should be possible after five days at the earliest. Federal Education Minister Anja Karliczek (CDU) had advertised before the discussions for a large common line of the states, which would ensure a lot of acceptance among parents.

The state health ministers also decided to expand the range of booster vaccinations. “In the future, citizens over the age of 60 will also be able to receive a third vaccination after medical advice and individual decision – but at the earliest six months after the first complete series of vaccinations,” said Holetschek. This should also be offered to nurses in old people’s and nursing homes and other facilities for vulnerable groups. Booster vaccinations are possible, among other things, for people in need of care, people with immunodeficiency and from 80 years.

Spahn appeals to the responsibility of the elderly

The chairman of the education union VBE, Udo Beckmann, told the German Press Agency in Berlin: “Shortening the time for a quarantine and limiting it to five days with a test helps to create transparent regulations. This reduces people’s displeasure and lack of understanding.”The real task, however, remains to determine comprehensibly and, if possible, also nationwide, according to which indicators it will be decided who must go into quarantine.

The German Society for Pediatric and Adolescent Medicine also advocated more targeted quarantine rules at schools. The condition is careful control over tests, said President Jörg Dötsch at a press briefing of the Science Media Center. At the same time, he called on adults to vaccinate. School closures had contributed to less severe trends among adults. “We demand very clearly: Before a school is closed again, all other areas of public, economic and social life must also be closed.”

Spahn also appealed to the responsibility of the elderly. Children and young people had given up a lot in the pandemic, now they deserved to be taken into account. This includes curbing the spread of corona with caution-because there is a clear connection between the infections as a whole and the outbreak, for example in day care centers and schools. In addition, more people should be vaccinated. “At the end of the day, vaccinations should not put under-12s in a difficult situation,” said Spahn. There is no vaccine for children under 12.

According to the RKI, almost 51 million people or 61.3 percent of the population are fully vaccinated with the second syringe, which is usually necessary. About 54.7 million people, or 65.8 percent of all residents, have at least one vaccination. The federal government called again to use vaccination offers. “Every vaccination counts for a safe autumn and a safe winter,” said government spokesman Steffen Seibert. He referred to a planned nationwide week of action from 13 to 19 September, during which vaccination opportunities are to be offered on site.