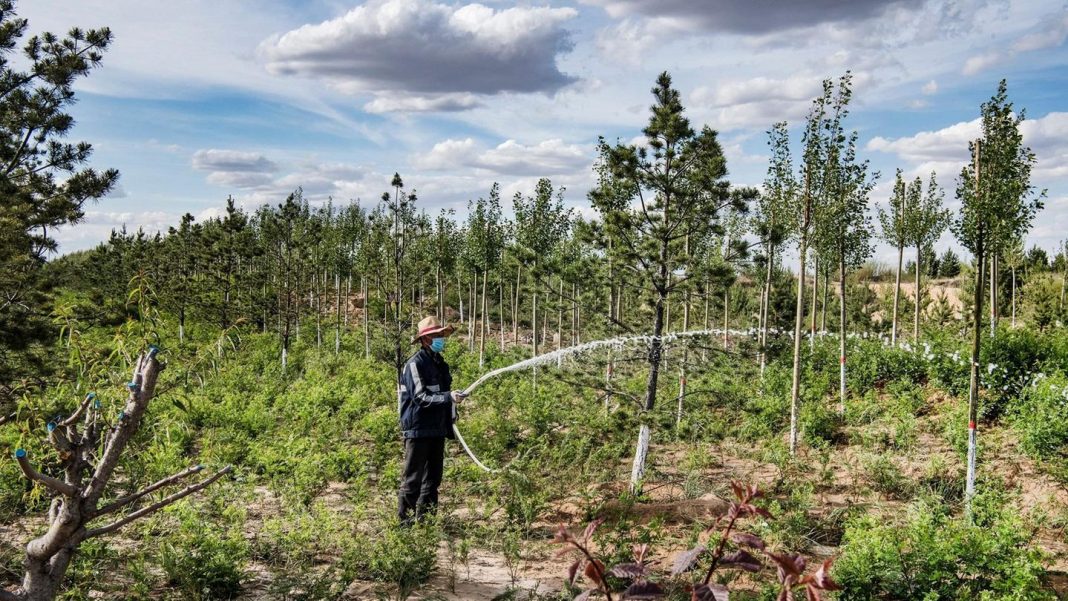 CO2 drives climate change, forests naturally remove CO2 from the atmosphere. Many countries are foraging, but none like China. There is a forest the size of Germany.

From China you are used to superlatives. The world’s largest high-speed railway network, the enormous upgrade, plus a host of prestigious large buildings and the project of the New Silk Road, which was distrustfully observed by the West. Much less known is that Beijing has long been building a new great wall-a green wall.

It is the largest and most ambitious megaproject in a country where there is truly no shortage of bold projects. The Great Green Wall was started at the end of the 1970s and should not be completed until 2050. It is the most massive reforestation program in the world. The Three-North Protection Belt program – another name-consists of three strips of newly created forest. Together they are as big as Germany, the forest is said to be 4500 kilometres long. For example, Beijing wants to stop the expansion of the Gobi desert, improve the regional climate and the soils there, and establish forestry.

In China, the Green Wall is a central PR topic. Students, actors, the leaders of the party and the state participate in the collective effort. March 12 is the national Day of tree planting. The most famous viral heroes are the two friends Jia Haixia and Jia Wenqi. Jia Haixia lost his eyesight, Jia Wenqi lost both arms. To survive, they leased a piece of land and began to plant it as part of afforestation. Despite their handicaps, they were able to plant over 10,000 trees and keep them alive.

But with so much – even prescribed-enthusiasm, problems could not be missed. Plan fulfillment was the goal of reforestation, so on devil come out trees were planted. Whether it could become a forest was a secondary question. The preference for fast-growing poplars led to a monoculture, which in turn allowed pests to thrive.

In more than 150 countries, the “Earth Day” or “Earth Day” which is intended to encourage reflection on our dealings with the environment. The media of the Bertelsmann Content Alliance, to which the star heard, take the action day as an occasion to “Let’s do it” to report on environmental issues and climate change.

There is massive criticism for the monocultures. A monoculture can only store about twelve tons of carbon per hectare, and a biodiverse forest can store 32 tons. Many plantings atrophied, because later no one took care of the forest. But Beijing learned from the mistakes, now a large part of the land is to be reforested in a natural way.

Although it will not go quite naturally because of the lack of fertile soil. There will also be a jump-start for the” natural ” forest. Beijing is setting all the levers in motion for the project of revitalizing the northern zones. Weather and rainfall should be regulated. Special rain-highways will bring additional rainfall in the Northern regions and reforestation areas. To this end, local communities are involved. Farmers get money for planting and caring for the trees. Climate change is far away for the simple rural population, so the calculation, the more promising is the appeal to self-interest.

A forest city campaign joins the protected forest. China of all places wants to build the greenest cities in the world. Since 2004, about 170 cities have started”Waldstadt” projects. No small parks are created, huge areas are planted. And here too, of course, there are problems. Last year, the pictures of a failed construction project went around the world. The high-rise buildings in Chengdu should be completely green. But the buildings turned into an apocalyptic jungle when there were delays in the tree.

But these glitches should not obstruct the view of the essentials. More than 100 different tree species have been planted in the newly created city of Xiong’an as part of the “Millennium Forest” programme. In autumn 2020 alone, 3600 hectares were planted with seedlings in this city. The declared goal is green cities. By 2030, 40 percent of its area will be covered with trees and green areas.

CO₂free – This app shows you how much your digital life contributes to climate change and helps you make the entire digital lifestyle almost climate neutral.

Reforestation is an important issue worldwide, in China the dimensions are only the largest, but also in Ireland and the Baltic States is being reforested. The problems, albeit on a small scale, are the same as in China. Environmentalists want a biodiverse jungle, landowners favor a subsidized wood factory. In China, the project has already paid off despite the bumpy start. In the affected regions, forest cover has almost doubled from 12 percent to 22 percent since 1978.

In these dimensions, CO2 from the atmosphere is strongly bound – first in the forest and later in the growing topsoil. And this is not without consequences for the climate. It is known from history that the genocide of the Indians of South America led to their cities and their fields being covered by forest. This intervention led to the” Little Ice Age”, which lasted from the 16th to the 19th century. The CO2 level in the air decreased at that time due to the increase of the forest in South America.

Forest has another advantage: if it succeeds in settling it, it costs hardly any operating costs. Unlike technical CO2 vacuum cleaners, he works all alone. Also, you don’t have to think about how to store the extracted CO2, it is naturally converted into wood and soil. However, large areas must be available for forestation. For this, problems with irrigation can occur.