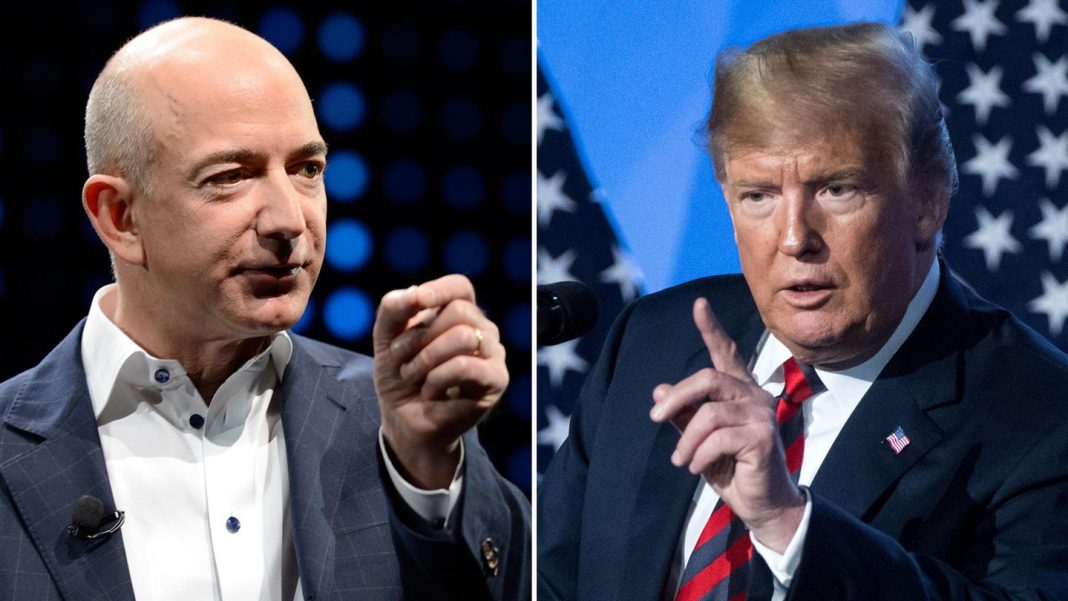 Amazon acquires movie giant MGM. But this does not only bring the Bond series to Prime Video. A well-kept secret is stored in the archives of the studio, which could further complicate the enmity between Jeff Bezos and Donald Trump.

With the acquisition of the film studio MGM, Amazon wants to populate its streaming service Prime Video with plenty of new material and herald a new era for the film landscape. But in addition to blockbusters such as the James Bond series, Amazon CEO Jeff Bezos has also secured access to something much more exclusive: the deleted footage from Donald Trump’s hit show “The Apprentice.” And they should have it in them.

In principle, however, the mega deal confirmed yesterday is about something else: With the acquisition, Amazon secures access to the entire film catalog of one of the most established Hollywood studios. With a volume of 8.45 billion, the second largest acquisition in Amazon’s history secures the rights to almost 4,000 films, including the Bond series, the “Rocky”films and classics such as “The Silence of the Lambs. Also series like” Fargo”,” Vikings “or” The Handmaid’s Tale ” belong to the package.

But the greatest scandal potential has the raw material of “The Apprentice”. While the former US president hardly seemed dominated in his public appearances and on Twitter, he is said to have dropped some of the facade during the recording of the job casting show. Sexist, anti-gay and racist attacks were repeatedly cut from the show, former employees reported. Even the N-word is said to have fallen several times, reported Omarosa Manigualt Newman, who had worked with Trump first on the show and then in the White House. “As the producer of the first two seasons of ‘The Apprentice,’ I can say there are much worse Trump tapes, ” announced producer Bill Pruitt back in 2016.

The broadcast, recorded from 2004 to 2017, is considered one of the most important building blocks for Trump’s presidency. Although he had already gained fame during his time as a real estate shark in the eighties, he owes his image as a tough businessman to his role as boss in the show, in which applicants have to fight for a job opportunity in teams.

The fact that the records are now owned by Amazon, of all places, is likely to cause discomfort for Donald Trump. Finally, he hopes to run for the presidency again in 2024. In his last term, he had repeatedly shot against Amazon CEO Jeff Bezos because he felt vilified by his newspaper, the “Washington Post”. The dispute escalated again and again. Trump’s ally David Pecker is said to have even tried to blackmail Bezos with nude photos from an affair with his gossip magazine “National Enquirer”, which ultimately ended in one of the most expensive divorces in history. Later, Trump had personally lobbied to award a billion-dollar order from the Pentagon to Microsoft instead of Amazon. “Fuck Amazon,” he allegedly said at the time.

However, a quick revenge campaign by publishing the Trump outtakes, as Latenight host Stephen Colbert demanded on Tuesday, is probably not to be expected. The right position on the outtakes is complicated. Although the studio confirmed to “Cnet” that they had the rights to the show and all materials, there were restrictions. “Various contractual and legal requirements limit MGM’s ability to post such materials,” the studio explained. Already in 2016, the then producer of the show and the studio had emphasized these restrictions in a joint statement. An investigation by the “New York Times” of Donald Trump’s tax document showed last year that he owns 50 percent of the show. Whether this is part of the obstacle, but the ex-president did not want to comment to “Cnet”.

Studio for the 21st century

For Jeff Bezos, however, access to the Trump recordings may have been just the icing on a very attractive deal anyway. “The idea behind it is really simple,” he explained the decision in a conference call with shareholders. “MGM has a huge and deep catalog of very popular fabrics. And with the talented people at MGM and Amazon Studios, we can reinvent and evolve these fabrics to bring them into the 21st century. “As a winner, he saw those people” who love stories.”

But Amazon itself should also hope for something from the deal. After the record growth of the streaming market in the Corona year 2020, the growth curves for all services are slowly flattening, the battle for viewers is getting tougher. While Netflix and Disney were able to successfully sell their own productions, this has been the case with Amazon to a much smaller extent. With the gigantic film and series catalog and the new possibilities of a complete film studio in the rear, the group should calculate much better chances than before.

Amazon was not the only prospective buyer MGM had negotiated with. Apple and Sony Pictures were also interested, according to the “Wall Street Journal”, but were deterred by the sum of 10 billion dollars demanded by the studio boss Kevin Ulrich. The biggest hurdle in the final negotiations, however, was ultimately not the purchase price, but the handling of the Bond series. It was here that Amazon finally agreed to compromise with the contentious producers Barbara Broccoli and Michael Wilson: they retain creative control over the longest film series in the world. And were able to ensure that a new Bond flick is always allowed to run in the cinema first. Before he eventually lands on Amazon Prime.